The Golden Age of The University

Posted on February 8, 2018 by ddubdrahcir 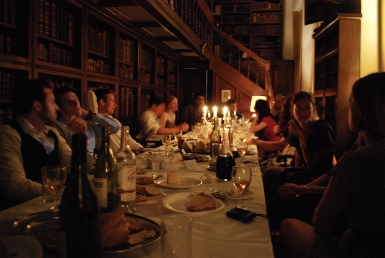 Solving the world’s problems, one cheese at a time.

The Professor paused to conjure up an obscure metaphor for the letter he was writing to the local paper about the proposed Gypsy Traveller camp on the (opposite, thankfully) edge of his Berkshire village. Leaning back, he laid his Mont Blanc pen – a gift from his grandfather on graduating from Sussex – on the desk and belched gently. Taking a sip of  tea to try and mask the taste of the sardines from lunch that had risen with the belch, he gazed across his library, through the dust motes cavorting in the beam from the (original) Anglepoise lamp. His eyes settled on the section of shelving reserved for his own books. There was a gap at the end that bothered him; he must fill it – he was sure there was another book lurking in him somewhere. But what? What remained to be said? There was an elusive spark, a glimpse of something at the back of his mind, and then it came into view – yes, that was it: The Golden Age of the University.

It would, of course, have to be an historical account. Higher education in this country (or globally, for that matter) wasn’t what it used to be. He could sweep across the 20th Century but focus on the peak, the three decades before Thatcherism really took hold, and before student numbers exploded under Blair. He’d done well at the local grammar school, earnt his place at Sussex. There were far too many students nowadays, and the cachet of having a degree – even a doctorate – had been watered down. Higher education was, he mused, less of a rich claret and more of a mid-ranged bottle of plonk: drinkable for the masses, but not suited to the palate of the genuine connoisseur.

He was glad he was on the outside now, not that he’d ever really considered himself an insider. He’d been emeritus for three years, giving the odd keynote if the conference location was to his liking, or writing occasional blue skies papers and excoriating book reviews. That was enough, just to keep his hand in and mind active – and to remind people that he was still there and still ‘had it’. He chuckled inwardly at the sudden recollection of Jim Whattinger, a colleague in Politics who’d written every other undergraduate lecture to be completely impenetrable to the students. Jim had quietly sent a memo to staff and junior researchers in advance, advising them of the date and time. They’d all sit at the back of the lecture theatre, enjoying the panicked or forlorn looks on the students’ faces as they failed to comprehend the language games being played on them.

Why had he thought of Jim? Oh yes, because you couldn’t get away with that now. Students had to be ‘happy’ all the time or they made representations to the university which kowtowed to their every whim. He and a select few of his colleagues had seen the writing on the wall early on. Students had started to take their foot off the gas, becoming lazy as fees kicked in. Now they expected everything to be done for them, no longer happy to work hard to develop their minds. They were oversensitive and entitled, thinking only about needless consumption and graduate jobs. When he was a student, going to university had meant something – it wasn’t about work, it was about debating (often over cheese and crackers) about how they could change the world. He’d dabbled in a bit of protest when in Paris by chance in ’68, living on the pittance of his maintenance grant, topped up with the odd bit of help from home. It wasn’t quite like The Young Ones, but it wasn’t far off. The students of today wanted private, en-suite accommodation, piling up debts they’d never need to repay. They had no idea what it was like to have to make ends meet on a budget.

Academic life was different, too. Management had taken over, squeezing the academic enterprise dry, measuring everything to within an inch of its life. There was no more time for staring out of the window, listening to the whirr of the paternoster down the hall while wrestling with the ideas of French philosophers. He still read the odd paper when he saw one he liked the look of, but they were mostly anodyne, talking about social and economic impact. There was no love of knowledge for its own sake any more. Back in the day, they’d been the trailblazers of their time, writing a dazzling book every few years that twisted literary styles inside out. They’d jousted with each other using terminology pilfered from Greek and Latin as their lances and shields, giddy in the joy and certainty of their own playful cleverness. Someone had joked at the time that they were British higher education’s Knights of the Round Table. Hubris, of course, but he let his thoughts wander self-indulgently to wonder which knight he might have been. He’d always liked the swashbuckling Lancelot, although the affair with Guinevere took some of the shine off it. Not what one does, go for another man’s wife, is it. He’d had a fling with that doctoral student (what was her name, was it Emily?) he’d supervised until he called the relationship off. She’d taken it badly, but they were both consenting adults, and he’d heard that she was a moderately successful academic in her own right now. No harm done.

Where had it all gone wrong? It was almost as if he looked up and the whole university system was different from one minute to the next. He’d been knee-deep in big projects in the latter stages of his career, pulling in hundreds of thousands in grants every year to keep the university’s ravenous accountants and promotion panels happy. He’d been savvy with the funding, though, making it stretch further by employing part-time post-docs to do the legwork. As was his right, he took first author on shared publications. Those were the rules of the game and he’d done his time as an exploited researcher after completing his own doctorate. He did write a well-received (and widely tweeted) article about inequality in the academic labour market for the Times Higher, but didn’t want to have the black mark of troublemaker on his CV. This meant that, for the last seven years of full-time work, he’d been able to split his time between two excellent universities. Both had been desperate to pay him through the nose for his name and world-class publications to boost their league table positions. No point looking a gift horse in the mouth, and those salaries had been earned on merit.

He looked down and caught a glimpse of his watch: 5pm already – about time for a sundowner. Port, probably – sherry wouldn’t kill off the still lingering taste of the sardines. He could, thankfully, still afford the quality stuff, no need to stoop to that ersatz rubbish from German discount supermarkets. The mortgage had been paid off a decade ago, the winter fuel payment saved them a bit of money (as did the bus pass), and being on a final salary pension helped. The book would have to wait.

3 Responses to The Golden Age of The University

Relax! It's just a PhD thesis at Oxford.

Academia. One week at a time

Professor of Politics and Public Policy, University of Stirling

The challenges encountered whilst doing a sociology of education PhD

A PhD student researching and writing about education, class and the city

Sociology of Difference by Zuleyka Zevallos

Population and Environment in the Middle East

Where higher education and sociology meet